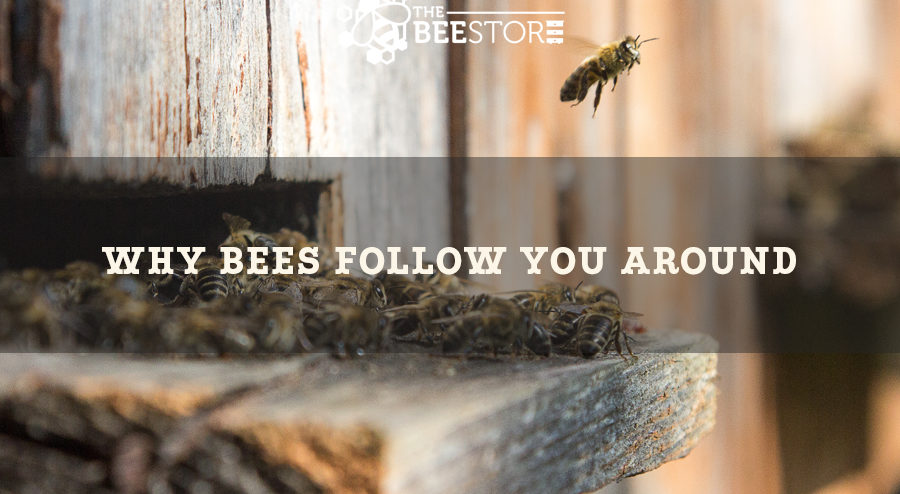 Have you ever gone outside to either take a little hike or walk the dog and noticed you aren’t alone? Ever go for a jog and hear the sound of buzzing not far behind you? Well, if you guessed it was probably a bumbling bee joining you, you aren’t wrong.

Do you smell that – Bees do!

Don’t go smelling under your armpits just yet because we are talking about certain perfumes and scents that can attract bees. You aren’t being mistaken for a beehive, but you just might smell sweet to the bees. Flowery scents don’t just smell good to humans, but bees can find those scents also attractive thinking that a flower full of pollen is near! So, take it as a compliment that your chosen perfume is liked by buzzing bees!

Bees follow you because Sweat is sweet to bees.

Some bees are attracted to human sweat. Sounds gross, but it’s true. These bees are usually metallic in color and rather small and harder to notice than their yellow and black counterparts. These bees can sting but aren’t known for being aggressive towards humans. They just want to take a lick of that sweet, sweet sweat.

It’s not just people who can notice a new outfit! Bees can be attracted to certain patterns and colors that people wear thinking they are a colorful flower waiting to be visited. Ever have a bee just not seem to be able to leave you alone? This could definitely be the reason why. Don’t worry though, once they figure out that you aren’t a giant flower they will be on their way finding pollen for the hive.

Okay, while most bees don’t want to bother you, they definitely will do what they can to defend what’s theirs- the hive and the queen. If someone decides to mess with their hive by either throwing rocks or attempting to remove it, the bees go into defense mode and start attacking their attacker. How do they do this? They do this by stinging the perpetrator. When a honeybee stings you, it leaves its stinger behind thus killing the honeybee. The stinger has a venomous toxin that may cause redness, swelling, and some pain. For most people, stings are just a nuisance, but for some who are allergic to bee stings, they can be deadly. If you feel like a beehive is near, be sure to clear the area and reach out to your local beekeeper’s association as they have beekeepers who can come out and remove the hive without too much disruption of the bees or of your property. The beekeepers will rehome them to a safe space where they won’t be bothered and won’t bother you!

So, you might have a new buzzing little friend or you just might bee their cup of tea depending on your outfit and perfume. Just know that usually, if you ignore them, they will eventually leave you be and go on to the next person or flower that looks rather good!