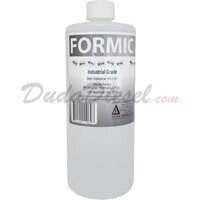 Formic acid is an important intermediate in chemical synthesis and occurs naturally, most notably in ant venom. It's name comes from the Latin word for ant, formica, referring to its early isolation by the distillation of ant bodies. Esters, salts and the anions derived from formic acid are referred to as formates.

Formic acid is a colorless liquid having a very pungent penetrating odor at room temperature. It is miscible with water and is of the most polar organic solvents and is somewhat soluble in hydrocarbons.

A major use of formic acid is as a preservative and antibacterial agent in livestock feed. It is used in Europe with silage (and fresh hay) to promote the fermentation of lactic acid and to suppress the formation of butyric acid.

Formic acid is also significantly used in the production of leather, including tanning and dyeing and finishing of textile because of its acidic nature.

Formic acid is also used in place of minerals acids for various cleaning products, such as limescale remover and toilet bowl cleaner. Beekeepers use formic acid as a miticide against the tracheal mite and the varroa mite.