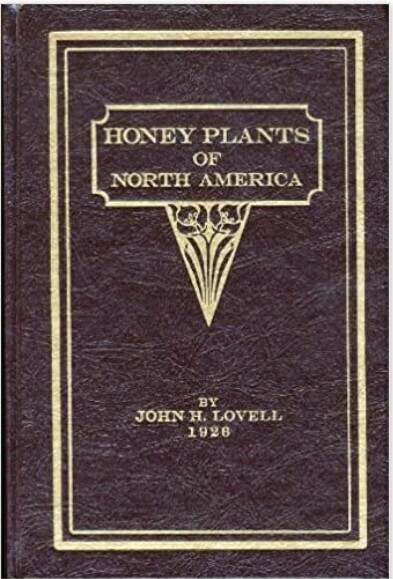 This is a direct reprint of the 1926 book first published by the A. I. Root Company in Medina, Ohio. 408 pages, with hundreds of black and white photos by the author.
Contents:

Nectar: Its Secretion, Protection, and Distribution, including the structure and role of the flower, the secretion of nectar, plants of little value to honey bees, pollen flowers and honey dew.

Descriptions of the 38 plants valuable chiefly for pollen, with photos of most and diagrams of some

Description of hundreds of American honey plants, north of Mexico, with photos of most, and maps depicting where they are most common in the wild, or most commonly grown as crops

The honey floras of the different states, and guide to the best locations for beekeeping, broken into 8 different U.S. regions, including
- The northeastern or New England region, including a bit of the Maritime Provinces
- The Appalachian Highlands, from the Catskills in New Your to northern Georgia dn Alabama
- The Coastal plain of the Atlantic Ocean and the Gulf of Mexico
- The central lowlands north of the Gulf Coastal Plain, including the prairies
- The Great Plains east of the Rocky Mountains
- The Rocky Mountains
- The desert region west of the Rocky Mountains and east of the Sierra Nevada and Cascade Ranges
- The Pacific coast, west of the Sierra Nevada and the Cascade ranges.
Within each of these regions each state is described and evaluated for its value as a prosperous beekeeping region. In the larger and more productive states, even counties are described, and even the parts of counties in some locations, where there are many beekeepers and many bees kept.