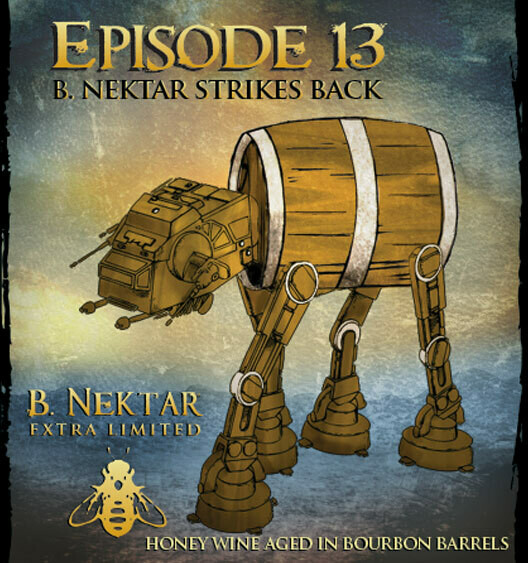 Guided by geeky imagination, influenced by sub-pop culture and never satisfied with the status quo, B. Nektar aims to bring a modern twist on mead as well as diversify craft mead, cider, and beer.

B. Nektar Meadery was founded in 2006 by Brad and Kerri Dahlhofer, with the help of their good friend Paul Zimmerman. Brad has been an avid homebrewer since 1998, making beers, meads, ciders, and wine for his own enjoyment. When Brad and Kerri got married in 2005, he made a mead to toast with at their wedding and received great reviews from the guests. Jokingly, he said that he’d someday open a meadery. Paul, a long-time friend, and fellow homebrewer, soon began making meads along with Brad in the Dahlhofers’ basement. Their meads quickly began winning awards at homebrewing competitions.

In the summer of 2006, Kerri was laid-off from her job. While sipping a glass of vanilla cinnamon mead made by Brad, she thought, “Why not try to sell this?” It was then that the three decided to take their mead making to the next level. In the spring of 2008, Brad too fell victim to layoffs, and the three worked night and day to prepare for their opening. After nearly two years since its inception, B. Nektar finally opened its doors on August 2, 2008 (National Mead Day).

B. Nektar’s session meads and hard ciders are now shaping the craft revolution. To say it’s been a long road from the home-brewing days would be a tremendous understatement, but B. Nektar continues to increase their production capacity and is currently the largest meadery in the U.S.A.

B. Nektar was the first meadery to join the ranks on the top 100 best breweries in the world by Ratebeer.com.

Proud of this story as they may be, they put a lot of effort into not taking themselves too seriously.

PICK UP IN STORE ONLY
MUST BE 21 TO PURCHASE MEAD