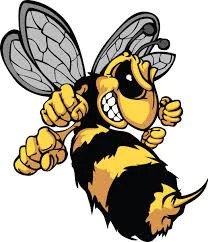 When I first decided to keep bees, I knew very little about these magical little creatures.  But, as a (former) Green Beret, I was up to the challenge.  After all, how hard could it be to raise a couple hundred thousand venomous little critters?  Well, there are a few things one should know ahead of time.  Fortunately, bees provide timely and actionable feedback – they are excellent teachers.  Last summer, I was taught some valuable lessons, which I captured for my beekeeping group.  now, I am passing them on to you!

There are times when one person’s lessons learned are better shared to prevent others from having to learn the same. This is true, regardless of how simple and seemingly commonsensical the lessons are. I offer a few lessons here for any new beekeeper who has yet to figure out the seemingly obvious.

I have two hives. Hive #1 consists of 10 frame deep, hive #2 consists of 2 10 frame deeps. Both have a one gallon feeder on top of the frames covered by a medium box. The hives are in my back yard and sit one in front of the other. I have been talking about expanding the apiary, and found a local beek who needed to get rid of 3 colonies in a hurry. Good news for me! Now all I needed to do was make room for the new hives! No worries there, I had been planning this already. 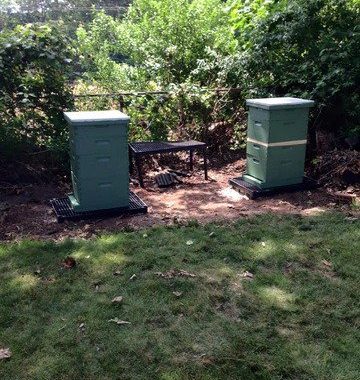 Lesson 1 – Plan for expansion before establishing your initial bee yard!

My two hives sit on plastic shelving units that act like pallets. I wanted to put my four hive, elevated, bench style stand where Hive #1 had been sitting on the ground. I enlisted my dear wife to help me move Hive #1 so that I could build the bench. We gently lifted the pallet and moved the hive about 10 feet away. All was well. I got to work with a shovel to level the area out for the simple cinder block and 4×4 bench. Within minutes, hundreds – if not thousands – of foragers, scouts, and other curious bees were buzzing around the former Hive #1 homestead. Though the hive was no longer there, a fella wearing shorts and a t-shirt wielding a shovel was in its place. This is about where things started to head south.

Lesson 2 – Wearing shorts and T-shirt is probably not the best after disturbing a bee hive.

Deciding to ignore the growing crowd of bees around me, I kept on working to level the bench. Shovel a little, replace the block and timber, check the level, repeat. Suddenly and without warning, a fierce little guard decided to attack. The first hit was above my ear on my temple, followed almost instantly by a second sting on my eyelid….ON MY EYE!!! OK…this just got personal! Within seconds, there were a LOT of bees on me. I started moving away smartly while trying to remain calm. I took a few more stings to my neck, my shoulder, and my forearm. Calm was fading fast.

Lesson 3 – Always have a veil when working around disturbed bees.

I had no smoke, I had no suit, I had no veil, and I had very few options. The bees were in attack mode, and by the number of stings I already had on me, I figured the “Kill the guy with the shovel” pheromone was in full swing. I couldn’t go in my house – a glimpse at the back door and I saw my toddler watching the sh#t show in the back, besides, I was dragging a small colony of bees around with me.

I needed smoke badly…and immediately. Lighting a smoker was just not gonna happen within the next 10 seconds, but there was a pile of tinder and kindling in the shed I used for my smoker. Even better, there was an old bird nest! Sorry bird…I threw down the food chain card and lit that nest up. It let loose with a glorious cloud of white smoke which I bathed in trying to get the pheromone off me. I was holding the burning nest in my hand like a caveman fending off a bear. I jammed the rest of the nest into the smoker and billowed away. Heavy smoke was flowing from the smoker, and I cleared a path to my back door.

Lesson 4 – Smoke…ALWAYS have smoke when disturbing a bee hive.

Had anyone seen my antics, they would have surely thought I had lost my mind. Yet, after all of this madness, I put on some jeans, donned my jacket, veil, and gloves and decided to finish the job. I still needed to get the hives up on the bench. Fully armored and armed with a refilled smoker, I waded back into the maelstrom. Several bees immediately resumed their harassment of me, but I quickly got the bench level. All will be well shortly!

And then it all went to Hell.

Lesson 5 – Always be deliberate when working with pissed off bees…shortcuts are really a bad idea in this scenario.

As I mentioned, both of my hives have one gallon feeders on top of the frames. I have been feeding them 1:1 (sugar and water) with an additional supplement of Megabee. Also, I had just refilled the feeders the day prior. Perhaps it was the volume of bee venom coursing through me, or just my desire to get this mess over with, but I picked up the entire hive from beneath the bottom board, forgetting that the full feeder was on top.

I was quickly reminded, however, when the syrup started flowing out of the entrance….and onto my pant leg. A frenzy ensued….big time. I put the hive down, straightened her up, and decided to tempt fate one last time. I figured I could get Hive #2 (2 deeps) up on the stand ricky-tick and get out of there without much trouble. Besides, I had already learned a few lessons that would help. I would just remove the top box, and gently place the bottom box on the bench. Problem – the boxes were propolized (glued) together!

Option 1 – try to break the boxes free with force….Option 2 – go to the shed and get your hive tool. Of course, I went with Option 2 ONLY AFTER I tried Option 1. My attempt to jar the boxes apart did little more than add another few thousand bees to the cartoon like cloud of angry bees, most of whom followed me to my shed to get the hive tool. I was also reminded that I had a leg full of syrup on my leg. I am not even sure what number sting that was; I had lost count. With the boxes apart, I moved the bottom box to the bench…so close to being done.

All I had to do was put the top box on and get out of dodge. I picked up the box very carefully, remembering the feeder this time, and took one step. POW….two of the little bastards (they had long since lost their “lady” status) got me just below the ankle, while several adventurous little vixens started up my pant leg. That was when I once again spilled a feeder full of pure honeybee meth. Things went straight bad.

I should point out that, in my life, I have come close to panic exactly three times. The first time was in Iraq, the second time was during a sky-diving incident, and the third time was when I decided to put a couple of beehives on a F##king bench. Fortunately, I panic on the inside.

The cloud of bees was getting ridiculous. I am not sure how many bees died because they were crushed between the top and bottom brood boxes, but the body count was sure to be high. There was no possible way I could get into my house. My daughter was still staring at me in disbelieve. I was furiously smoking myself and the area around me, but the legions were set on war. I had to get out of there, so I scurried back to the shed. I filled that shed with smoke and me inside it.

Lesson 7 – When the situation seems hopeless, filling your shed with smoke to the point of smoke inhalation is not necessarily a bad idea. Never quit!!

I stood in that smoke filled shed for quite a few minutes. When I opened the door, it must have looked like something out of a Cheech and Chong flick. I emerged out of the smoke and damn if there weren’t a handful of tenacious little she-devils waiting to attack. The raging cloud of bees by the hives was insane. I suppose bees from every neck of the woods was swarming over all that Megabee syrup. I waited for them to form the shape of an arrow and charge me like an old Bugs Bunny clip. With the little smoke I had left, I fended off the remaining pursuers and got inside my house, hoping that my neighbors didn’t see any of this anarchy in my back yard.

The feeding frenzy was like nothing I had ever seen. I thought, hmmm….this could really be an educational moment. I was still dressed in my jacket and gloves, so I grabbed my veil and camera and thought I would see this a little closer. Being all too clever, I kept my distance to about 20-25 feet and decided I would film the madness. That thought lasted about 4 seconds when my final sting got me in the thigh, through my pants. The galaxy could not be any clearer with its signs….GET AWAY FROM THE BEES. I did.

So things seemed to calm down around the hives. I checked them this morning early, and all was in order. However, I am sitting here covered in welts and a swollen eyelid, feeling like I had a night out at fight club. I have a few more hard learned lessons under my belt and a new found respect for the courage and ferocity of my bees. Tomorrow, I will get three more colonies.